The first edition of the Milano Jewelry Week, held from 24 to 27 October 2019, received great approval from visitors and all the actors involved in the event, recognizing the high artistic and cultural value that was given to the city of Milan. Artistar Jewels 2019 Fall Edition was the heart of the event, astonishing the visitors of Palazzo Bovara with over 500 creations on display. The public was enchanted not only by the internationality of the event, which was able to unite 150 artists from all over the world, but also by the variety of techniques represented as well as the refinement of materials.

On Friday 25th October, during the Awarding Night, the winners of the Artistar Jewels 2019 Fall Edition contest were announced. The three winners who were awarded the Artist Jewels Award - delivered by Enzo Carbone, CEO and Founder of Artistar Jewels - and who can therefore participate for free in the 2020 edition, are the Florentine goldsmith Alessandro Dari, the Czech Petra Mohylova and the Russian duo PalladinGold ™ and Tatyana Kholodnova. Alessandro Dari is Florentine Master of Goldsmith and Sculptor Arts. His ring-sculpture, which with its sinuous forms wanted to represent the body of a woman, has bewitched the jury for its poetry. A more colorful and contemporary work is instead that of Petra Mohylova, a self-taught artist who with her creations represents the human body in all its playfulness. Finally, the PalladinGold ™ and Tatyana Kholodnova jewelry studio represents an alliance of space technology and artistic thought, embodied in jewelry.

A special mention was given to the artists Alessandra Mazzeo and Lucia Petracca of Pin-Device, who on the anniversary of the fall of the Berlin wall were able to represent in a jewel the historical importance of this event. The PIN-DEVICE in gold (patent US7510687) symbolizes in the ring the technological innovation that breaks down the Wall, allowing the union of the European peoples.

During the exclusive awards ceremony, numerous awards were given personally by the judges of the contest who selected them. The young American Mando Bee won the Accessory Vogue Vanity Fair Award presented by Elisabetta Barracchia, director of Accessory Vogue Vanity Fair and Wedding Vogue Vanity Fair. The artist will be the protagonist of an article entirely dedicated to her in the next issue of the magazine. Gianni De Liguoro, founder of the homonymous brand, awarded the Italian designer Fabiana Fusco, giving her the opportunity to create a jewel in collaboration with the maison. The Chinese Xiaohui Yang, with her self-portrait necklaces, was awarded by Ivan Perini, consultant and buyer, who will create a communication and social campaign for her.

Guido Solari, director of the Via Tortona 26 Headquarters in Milan and Director of the SOA Lab & Factory in Via Savona 20 in Milan assigned his recognition to the talented Italian designer Ilaria De Lorenzi, offering her the precious opportunity to attend for free one of the courses proposed by the prestigious Milanese school.

The jewelry blogger Laura Inghirami, founder of Donna Jewel, has chosen for a social campaign the artist Queenie Cao, who has been able to represent through her creations a message of love and positivity. The Jewellery Review Award, given by Irina Slesareva, director of Jewellery Review Magazine and Creative Director of the Russian Line Jewellery Contest, was assigned to the Polish designer Anna Zycka, with her poetic jewels inspired by flowers and nature. An editorial will be dedicated to her in the next issue of the Russian magazine.

The Assamblage Award, which consists of the unique opportunity to exhibit at an international exhibition for the 10 years of the Romanian association, has awarded five Italian designers: Emanuela Duca, MagmaLaB, Laura Forte, Margherita Forgione and Fabiana Fusco. Kathy Kraus has also awarded three awards to three international artists who will exhibit their creations during the upcoming Munich Jewellery Week in March: Olga Van Doorn, Lisi Fracchia and Anna Maria Pitt.

Even the Wine Sponsor Valdo has decided to reward the talent of the artists in the show, giving a Limited Edition in Magnum format Classic Method Valdo 90th Anniversary to the Italian artist Margherita Forgione, who knew how to amaze the brand with her creative and precious jewels at the time same.

Finally the designer Gianni De Benedittis established the futuroRemoto jewels Award: two sums of money assigned, respectively, to a participant of Artistar Jewels and a student of one of the schools participating in the Milano Jewelry Week, who stood out for their excellent mastery in the goldsmith technique without forgetting the needs and trends of the fashion system.

The jury was composed, in addition to Gianni De Benedittis, founder and Creative Director of futuroRemoto, by Simonetta Gianfelici, top model, fashion consultant and talent scout, Carlo Capasa, President of the National Chamber of Italian Fashion and Saturnino Celani, musician of international fame and eyewear designer. The winner of the award comes from GALDUS and is the very young Allegra Cezza. Chiara Passoni is the winner for Artistar Jewels, who was able to convince the jury with her collection inspired by the ferocity and power of marine animals. A special mention was finally assigned to Atefe Rezaei of IED Turin.

Artistar Jewels is an articulated project of communication and selection aimed at the public and the new generations of goldsmiths and designers: it was therefore important to involve and support Milanese institutions such as the Galdus professional school, which lent some brilliant students of jewellery courses to guide visitors with commitment and passion during the exhibition.

The splendid creations of the protagonists of Artistar Jewels 2019 Fall Edition will be told in the eponymous volume published by the publisher Logo Fausto Lupetti, through the images of the jewels captured by the photo shoot entirely edited by the Artistar Jewels team. The book will be available in all bookstores in Italy and the main European capitals from November 2019 and will also be sent to 5,000 contacts in the sector, including buyers, concept stores, journalists, fashion stylists and jewel galleries. The next edition of Artistar Jewels will take place within the Milano Jewelry Week 2020. 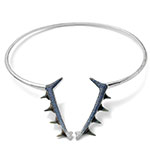 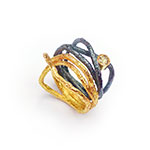 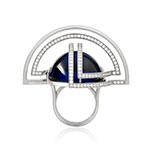 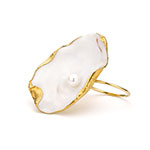